The main showpiece of the site, from the standpoint of our family history, is this lovely memorial which the Hobbs' erected themselves to commemorate the land's history. It's located prominently on the drive into the property just after you turn off the highway. Here's a photo of myself and my sister with Mr. Hobbs, who was our chauffeur and tour guide for the visit. Below that photo is a closeup of two of the plaques on the memorial. One highlights the 323rd Bomb Group, which was the group our father served with the longest in England. The other commemorates the dedication of the memorial in 2007, and the guest of honor at the ceremony, Robert Mims, who was a friend of our father's during the war. And whose family put us in contact with the Hobbs'.

Little of the original base remains today—it's a much more pleasing environment than during the War, I'm sure! This transformation makes the memorial efforts of the Hobbs' so much more important. But it is lovely now. Here is a shot of the convention center's golf course, from the restaurant's deck, where we were treated to tea by Mr. Hobbs: 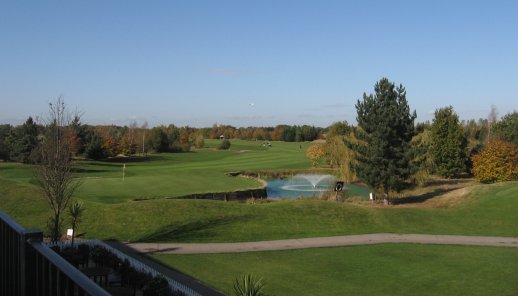 However, there are a few reminders left of the old base. On the left is a shot of the only remaining original structure—typically, a quonset hut like those used on so many UK bases during the War. Now it's a warehouse for one of the business park's tenants. On the right is a photo of myself, Joan, and Henry at the end of what's left of the original runway. There is another, functioning, runway on the site today, used for light aircraft—and a separate facility for hot air balloning! But this is where the wartime airstrip was located:

Back to Dream Season home • Back to East Anglia home